The establishment of a comprehensive development zone for the further opening-up of the service sector and a pilot free trade zone mainly featuring technological innovation and the digital economy has injected new impetus into the rapid development of Daxing district in southern Beijing, local officials said.

In the first half of this year, Daxing district's GDP exceeded 65 billion yuan ($10.1 billion), an increase of 67.8 percent year-on-year. The growth rate ranked it first in the city.

Moreover, from January to June, Daxing had completed nearly 44 billion yuan in fixed-asset investment, a year-on-year increase of 17.8 percent; the total output value of enterprises above designated size－those whose main business revenue is above 20 million yuan annually－had hit 118.2 billion yuan, 234 percent up on the figure for the same period 2020; and the district-level fiscal revenue had reached 5.9 billion yuan, up 16.7 percent year-on-year.

The State Council approved the construction of the Integrated National Demonstration Zone for Opening up the Services Sector and the China (Beijing) Pilot Free Trade Zone in September 2020.

Since then, Daxing has been taking proactive action to further improve its policies on reform and opening-up in line with international standards within two to three years, as well as giving full play to the strength of the district's key industries and functional areas, and releasing the vitality and energy of its export-oriented economy, according to the government.

Daxing has also blueprinted a new development pattern known as "1+4+6" for the better construction of the two zones, the district commission of commerce said.

Beijing Daxing International Airport was one of the nation's major construction projects in recent years. With an investment of around 80 billion yuan, the airport located in the district began operating in September 2019 after four years of construction.

Last year, its annual passenger throughput surpassed 16 million. Altogether, around 130,000 flights and 77,000 metric tons of goods took off from and landed at the airport.

The Daxing International Airport Economic Zone covers an area of 150 square kilometers and is a key part of the local government's efforts to contribute to the regional economy.

The zone is an important area for the opening-up of the national service industry and the Beijing FTZ, said Cai Qi, Beijing's Party secretary, during an inspection in November 2020.

Daxing takes the airport economic zone as a main focus of the two national-level zones' construction.

With a raft of incentive policies released, the Daxing economic zone has welcomed an increasing number of domestic and international companies. To better assist overseas investment attraction, it has set up offices in Germany, Canada and Japan, and also established contact with more than 110 international investment agencies and business associations.

Also, the economic zone has played an important role in promoting the integrated development of the airport, industries and the city via its three pillar functions pertaining to air logistics, scientific and technological innovation, and service guarantee capacity.

As a major project supporting the construction of the two zones, the China-Japan (Beijing) Innovation Cooperation Demonstration Zone, which is under construction, will focus on such industries as medicine and health, advanced intelligent manufacturing and the digital economy. It is expected to attract companies engaging in cutting-edge fields, and a group of high value-added and efficient corporate headquarters and research centers.

The demonstration zone also plans to become a good example of Sino-Japanese cooperation in the research on high-performance rare earth functional materials, and a key player in global hydrogen energy research and development, according to the district government. 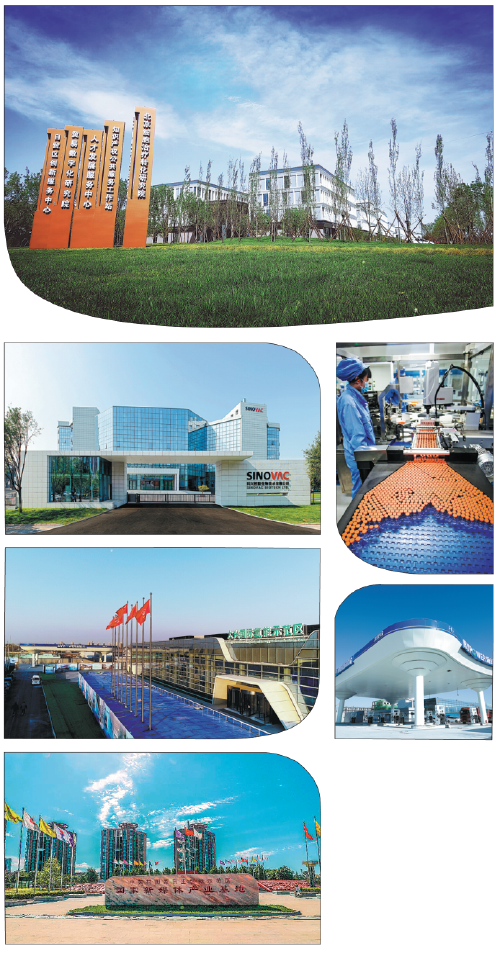 Clockwise from top: Beijing Daxing International Airport Economic Zone is home to a group of research and innovation service providers. A Sinovac Biotech employee works in a plant in Daxing. One of the world's largest hydrogen fueling stations is located in Daxing. A national new media industrial base in Daxing. Hydrogen energy is expected to play a key role in Daxing's development. Sinovac Biotech operates a branch in Daxing's biopharmaceutical base. [Photo/China Daily]