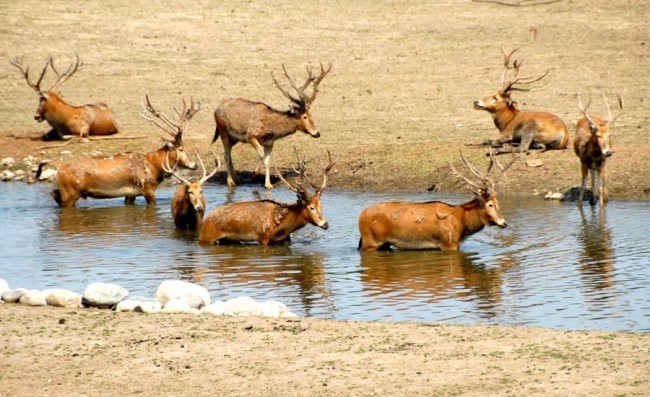 Milu, a deer species endemic to China that became extinct in the wild now inhabits the Nanhaizi Milu Park in Beijing's Daxing district. [Photo by Geng Feifei from China Daily]

Beijing will establish 600 biodiversity conservation communities by 2035 to restore the habitats of wild animals and further protect regional biodiversity, according to the city's gardening and greening authority.

Wang Jinzeng, director of the ecological restoration department of the Beijing Municipal Forestry and Parks Bureau, said the city will build 120 biodiversity conservation communities annually, with 20 in the downtown area and 100 on the plain.

The biodiversity conservation community is habitat for animals consisting of insect inns and benjeshecken — also known as a "dead hedge" — constructed from materials left over from pruning.

"It's actually a reserved area," he told Beijing News. "We will apply natural soft isolation by planting thorny plants to reduce human intervention."

Previously, arbor plants were mostly grown for greening in the city, Wang said. But in the future, the number of shrubs will be increased to leave areas for the animals to "rest" and make the variety of plants much richer, he said, adding that the city will connect its scattered green spaces to form ecological corridors that will open animal migration channels and promote the restoration of the wild population.

At present, there are 2,088 species of vascular plants in Beijing, with 80 of those under state or municipal protection, according to its Forestry and Parks Bureau. Nearly 600 species of terrestrial vertebrates have been discovered in the capital city.