Located in the hinterland of the Beijing-Tianjin-Hebei cluster and boasting the comprehensive transportation methods of aviation, highways and railways, Beijing Daxing International Airport is driving the development of the region.

Known as the new gateway of China, it has become an important tool for the country to focus on the future development of world-class urban areas.

Director of the development and reform department at the management committee of the airport economic zone in Daxing district said the airport's average daily passenger throughput has exceeded 100,000.

The yearly cargo and mail throughput of the airport is expected to reach 4 million metric tons in the next few years.

The economic zone of Daxing airport, with an overall control area of about 1,028 square kilometers and a core area of about 150 sq km, is the only advantageous area in the country that has free trade zone policies of two regions and cities at the same time.

Among them, the Daxing part is 50 sq km, and the Hebei Langfang part is about 100 sq km.

The western area is 26 sq km, with services such as healthcare, an international talent community, science and technology innovation zone and hospital. 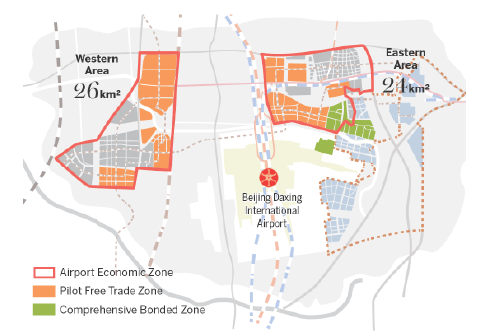 Beijing Daxing International Airport's advantages are mainly in the high starting point of national strategies and the late-mover advantage in planning and construction.

The urban design of the airport economic zone and the industrial planning to promote its sustainable development are determined with the life and health industry as the lead, high-end services and aviation security as the two basic sectors as well as new-generation information technologies and advanced equipment.

The contracted projects in the life and health fields have started construction, focusing on aviation industry projects such as the Civil Aviation Airworthiness Certification Center.

Within the area of about 100 sq km in Langfang, more than half of the area is used for overall management and control of natural environment such as rivers, corridors, forests and farmland.

"If Beijing Daxing International Airport is a phoenix head, here we are a phoenix body, a wing and a feather," said deputy director of the management committee of the airport economic zone in Langfang.

He said the goal is to make Langfang area a model of green and high-quality growth in Hebei, a large platform for the coordinated development of Beijing-Tianjin-Hebei region and a world-class aviation city.

From 2019 to 2035, the Langfang part of the Daxing airport economic zone will build 902 construction and public service facilities, with a total investment of about 95 billion yuan ($14.5 billion). 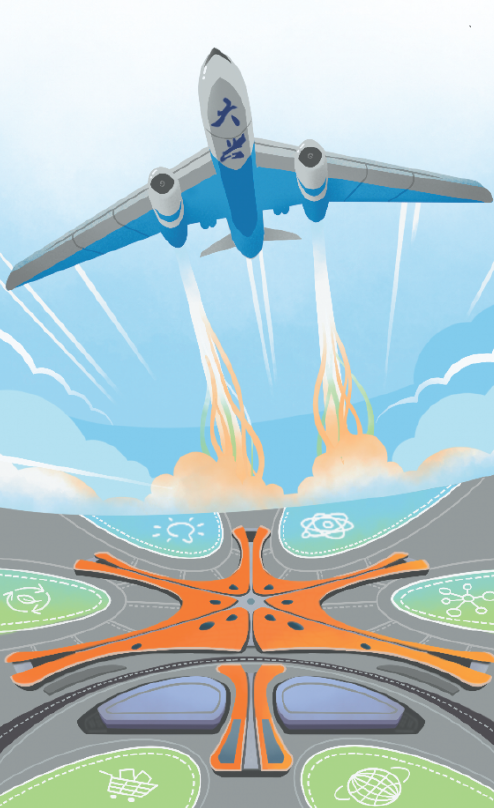