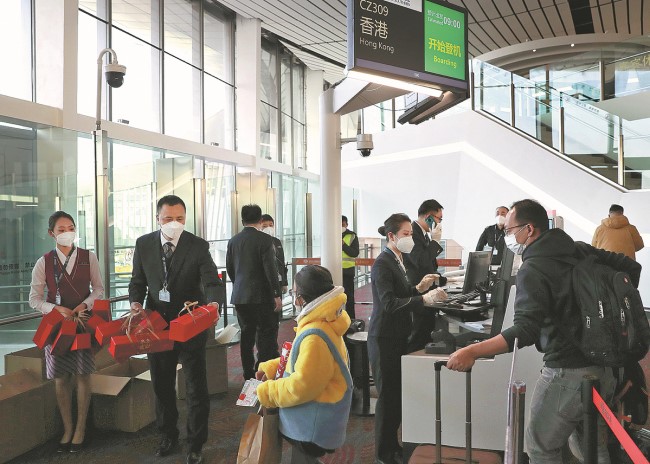 China Southern Airlines Flight CZ309 left the airport at 9 am for Hong Kong, the first cross-border passenger flight to originate from Daxing in nearly three years.

"This is my first cross-border trip since the outbreak of the epidemic, and I am very excited and happy to be on the first flight," said passenger Lan Yu.

Lan said she plans to spend the coming Spring Festival with her friends in Hong Kong, and she chose to depart from Daxing airport because the services, facilities and inbound-outbound procedures are efficient.

Zhao Zhao, deputy director of customs at the airport, said that after receiving the plan to resume cross-border routes, customs officers have followed up on renovations, kept abreast of information regarding inbound and outbound flights, and conducted detailed checks on the operations of the airport's facilities and working procedures under customs supervision to ensure passengers receive the best service.

Passengers can make health declarations via a mini-program or fill in the entry-exit health declaration card to obtain a QR code that can be scanned to show their status. They can use that code to pass through customs more quickly.

Su Yiming, director of the aviation business department of Daxing airport, said that from Tuesday, China Southern, China Eastern, Capital and Himalaya airlines will resume international and regional passenger routes from the airport.

According to the National Immigration Administration, since the implementation of the optimized immigration policies on Jan 8, immigration authorities have resumed customs clearance at land and water ports in an orderly manner, and have resumed accepting and approving entry and exit documents for Chinese and foreign nationals.

The authorities now inspect about half a million inbound and outbound travelers each day on average, an increase of 48.2 percent before the policy took effect. They also accept and handle an average of about 341,000 entry-exit documents each day, up 129.4 percent, the NIA said.

Li Peixuan contributed to this story.